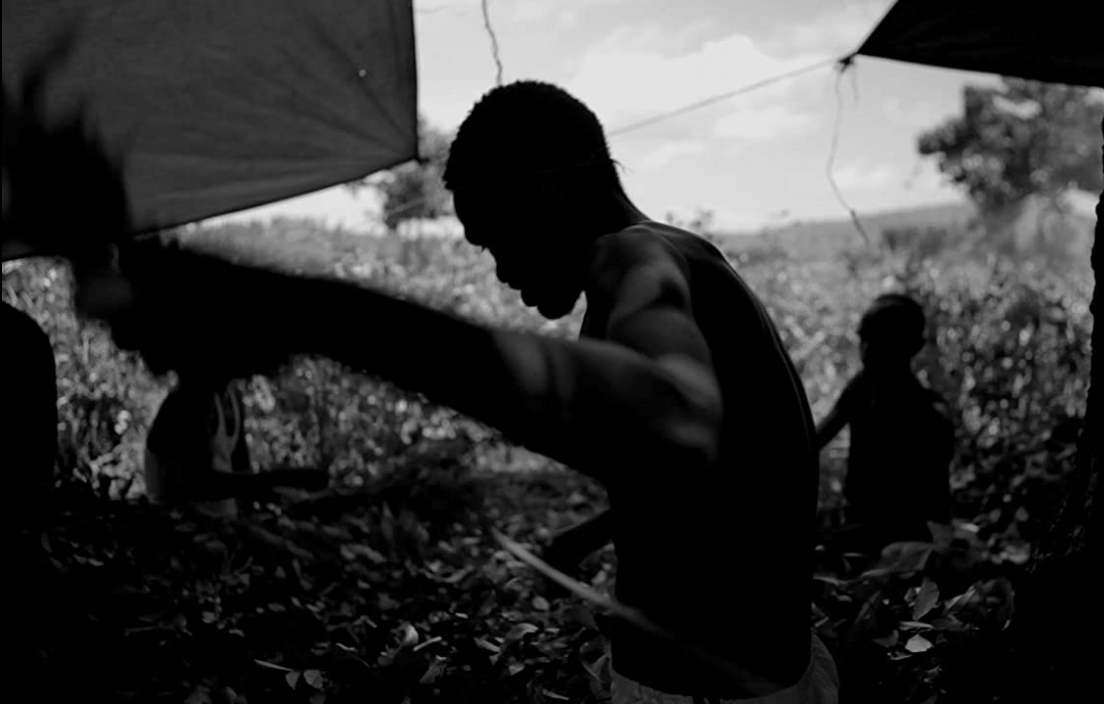 "Ethiopian legend has it that khat, a stimulant leaf, was found by Sufi Imams in search of eternity. Inspired by this myth, Jessica Beshir’s “Faya Dayi” is a spiritual journey into the highlands of the walled city of Harar, a place immersed in the rituals surrounding this plant, Ethiopia’s most lucrative cash crop today. Through the prism of the khat trade, the film weaves a tapestry of intimate stories of people caught between government repression, khat-induced reverie, and treacherous journeys across the Red Sea, and offers a window into the dreams of the youth who long for better lives elsewhere.

For centuries in Ethiopia, the Sufi Muslims of Harar have chewed the khat leaf for the purposes of religious meditation. Over the past three decades, khat consumption has broken out of Sufi circles and entered the mainstream to become a daily ritual among people of all ages, religions and ethnicities, for whom chewing khat is a means to achieve Merkhana — a term that describes the high one gets from what is effectively a psychoactive drug not all that different from Cannabis. It has various mental and physical effects, which include euphoria and altered states of mind. For many, Merkhana is provides an escape from everyday realities, and the only place where their hopes, and dreams can actually exist.

Khat, for most unemployed youth, has become a way to overcome the sense of hopelessness, a way to tune out reality. They are all searching for a seemingly elusive sense of agency, as well as living with the contradictions of loving a land that makes it difficult for them to live in peace.

In the last decade, the crops that Ethiopia primarily exported — teff, sorghum, and coffee — have been replaced by the leafy green. With social significance, it has sustained so many who have worked in the fields for generations. However familiar the work is, some young people who have grown up in its shadow want more for themselves — life away from the fields; life without khat; life entirely elsewhere. They consider leaving home and all they have ever known for something new, far away, and, while perhaps more economically beneficial, lonelier and more isolating.

Shot entirely in stunning black and white, “Faya Dayi” opens with a long shot of a somewhat amorphous, barren landscape, nighttime, dark, crickets providing the only soundtrack, and in the distance a lone figure running playfully, starts to come into view. We see that it’s a child, as he or she runs past the camera. Cut to bewitching shots of elders indoors, some faceless, some not, chanting, giving thanks to God, separating khat leaves from their stems, and, in some cases, pounding them, as incense burns in a pot, the smoke it emits, thick and intense.And then a lengthy shot of an open doorway, on the other side, an ambiguous view — smoky, cavernous, vast, dark depths — a haunting score providing an exclamation mark. It’s interrupted by a meek female voiceover, almost like that of a child, beginning a story about the Harari legend of a man named Azuekherlaini, who was tasked by God to find the Maoul Hayat (water of eternal life). The fable stretches the length of the film, as the voiceover interrupts intermittently to continue where she previously ended.

But that’s just the dressing on this striking, if enigmatic, transgenerational journey into the highlands of Harar, immersed in the rituals of khat, weaving a tapestry of hallucinatory stories that offer a window into the dreams of youth.

Unfolding more like a hybrid scripted narrative and documentary, the central story of “Faya Dayi” doesn’t follow a straight line, as it occasionally checks in on Mohammed, a 14-year-old, and the film’s presumed primary character, who works as an errand boy for the khat users in Harar. He lives with his father who, like so many in town, chews khat daily and often fights with Mohammed due to the mood swings caused by his addiction. Mohammed becomes anxious for a better life, but to have it, he must make a treacherous journey across the Red Sea to Saudi Arabia.

The khat-chewing lifestyle of the adults that surrounds Mohammed and the inherent political pressures against oppressed Oromo youth like him — an almost five-decade-long conflict between Oromo separatists and the Government of Ethiopia that began in 1973 — lead him to dreaming of reuniting with his mother who left for greener pastures overseas, in search of work, when he was much too young to understand. She never returned. He often speaks internally to her as a survival mechanism to compartmentalize the loneliness he feels. Through his eyes, viewers meet the dwellers of Harar, as well as Mohammed’s friends in the khat farming community who are instrumental in shaping his decision to finally take the perilous trek to join his mother.

Serving almost as interludes are subplots involving the reunification of two lovers. It’s suggested that he left – for where, it’s not apparent – and now he’s returned, as she wrestles with her feelings about his initial departure and homecoming.

And there’s the story of a teenaged schoolboy, suddenly fatherless, having to become man of the house, working in a khat factory in order to take care of his family.

But grasping these stories seems to matter less than simply understanding the overarching themes of escape, what home is, isolation, loneliness, and hopelessness, while appreciating the atmosphere, the landscape and soundscape.

Characters seem to be in a state of constant flux — either dreaming of leaving, or are returning after having previously left. “Memories are all you travel with,” says one of those who once left and has now returned, but is dreaming of leaving again. “You leave everything, then you start remembering; the sounds of birds, nature, the clean air.”

There are recurring images of birds, both in flight and stationary, representative of both the dreams of escape primarily the young have, as well as their indecision — whether to leave or stay.

Generally, there’s a lack of exposition that feels refreshing. Audiences enter the story in medias res. Characters are mostly nameless, and in some cases faceless as well, and there are scenes in which the dialogue or chanting isn’t subtitled, which in some ways implies an irrelevancy. This is all to say that “Faya Dayi” is tumescent with atmosphere. The wispy stories Beshir tells are enough for her to forge all her luscious imagery.

“Faya Dayi” is chiefly a collection of grand shots of beautiful scenery, close-ups of strong faces, and medium frames from the rear, mostly of women, traditionally dressed, which means covered from head to toe in Islamic chador — a full-length cloak typically held closed at the front by the wearer’s hands or under their arms. This renders them virtually unrecognizable, almost like apparitions, especially at 180 frames-per-second. It’s certainly possible that Beshir’s intent was to make a statement about the invisibility of women in Harar.

There are a dozen tropes for films about Africans longing for better lives overseas, but this film’s listlessness renders it oddly mesmeric — or mind-numbingly slow, some may sulk. It focuses on the mundanity of everyday life, struck anew through a striking, if distant, mysterious stare of the camera. The vantage points just differ, from stargazing youth, to disaffected elderly, knitting, tilling soil, engaging in various rituals, prayer circles, making life seem almost like an aimless montage.

A kind of a haunting sadness pervades throughout the film — a narrative that parallels the experiences and hallucinations of khat chewers, as characters are in some ways zombified, and the film itself becomes a visual and sonic Merkhana trip of its own.

Beshir could’ve shaved a good 15-20 minutes and it would have still been just as effective if not more so. However, it’s a film that stays wriggling around in your mind. Stylish, it’s given a calming dimension by Mehandis Geleto’s bewitching, recurring chant titled “Kenna Uumaa.”

“Everyone chews [khat] to get away,” Mohammed says. “The flesh is here but their soul is gone. I heard that when people are high, they start watching films in their minds. Once you go in, you won’t find a way out.”

“Faya Dayi” is a film that invites the mind and soul with its visual grandeur, and keeps the viewer engaged with tension and mystery that seems to be lurking beneath its surface. It’s familiar yet foreign — a world one must at once surrender to, yet be careful to not completely lose oneself in." (Tambay Obenson / Indiewire)*